When I can take the trash out into the garage without freezing for those mille-moments then I know spring must be here! And there isn’t a time of year that I embrace more. The days are just a bit longer. Fresh air has never felt so good.  And people are living life outside. All telltale signs of the season. We live in the second best bicycle-friendly state. And I think that’s pretty outstanding considering the majority of our year is spent in frigid temperatures that leave you cursing your permanent residency. So yeah, it’s cool that we possess the infrastructure, funding, enforcement and encouragement to boast this kind of activity. But like any fun parade, someone has to rain on it.

The drive to pick my son up is not a long one. It winds through our quaint little town and crosses into the neighboring one, where he goes to school. I notice every little change because I take that route more times than I can count. With these welcoming temperatures, people are taking full advantage. So lately I’ve observed all the additional bodies on the road. Walking. Running. Biking. And I can usually discern between the avid cyclists and the leisure ones. The leisure ones typically ride on the sidewalk and seem acutely aware of their surroundings. The avid ones typically choose to ride on the road. Which leaves these to form two separate categories of their own. The entitled idiots and the obedient riders. It’s a true mix of those who feel they own the road and those who know they share the road. The other day it was one of those labeled idiots who cast himself a fool. The kind who give cyclists a bad rap. As I neared an intersection with a red light, I paused behind a few vehicles, all in the turning lane to go right. I also noticed a cyclist in the mix as he sat between two cars. While the first car waited for crossing traffic, the gentleman on his bike decided to veer around the car in front of him and take his own liberties. Because of this, an oncoming car {WITH the right away} practically crushed him. It was one of those near accidents that cause you to gasp out loud in your car. Horns are honking, people are braking and then off rides the cyclist without any regard. Minus the friendly finger he waved as he kept on pedaling. For real. Unreal. Yes. These are the idiots we must learn to co-exist with.

In any collision between a bicycle and a vehicle, the vehicle is going to win. Always. This isn’t beast-mode mentality. It’s simply a hard fact. Does this make cyclists more vulnerable? Certainly. But it doesn’t mean they have to be a victim. Added bike lanes to high-speed roads are becoming more popular. They’re intended to show drivers AND riders that the road is meant to be shared. But that means the cyclist obeys the same rules and regulations as the driver. Enter my biggest pet peeve. If you’re on the sidewalk assuming pedestrian laws then stick to those. If you’re on the road assuming driver laws, STICK TO THOSE. You don’t get the best of both worlds simply because you feel entitled. That whole vulnerability to being smaller isn’t a license to be a jerk. Road rage? This is mine. I passed kindergarten and I know how to share. But it’s increasingly difficult when someone else isn’t as willing to render the same. It’s an attitude, I get it. And I could probably stand to gain a little more grace. But sometimes stupid people make it hard. Since the whole shared mindset isn’t leading the way right now, cyclists have to be extra cautious for motorists who don’t have the kind of patience that’s required with this kind of adopted attitude. But I can tell you that the gentleman who nearly shorted his life is the prime example why motorist patience has yet to be favored. Because stupid tends to ruin sensible.

Bicyclists are a huge benefit. It’s less congestion on the road and an environmentally friendly option. The popularity of this activity increases as commuting expenses grow and changing temperatures make it a reasonable alternative. I love to bike. I don’t do it near as often as I used to. But I know the individuals who choose to get from point A to point B on their bike are just as important as the individuals making their way on four or more wheels. But importance loses meaning when privilege becomes a hierarchy. My fifth grade son proudly serves on a safety patrol team at his school. And he’s quick to know that safety always comes first. Indeed. Except when stupidity prevails. So let’s all go back to our elementary roots. Stop. Think. Act. Then maybe we can all peacefully co-exist a heck of a lot better. 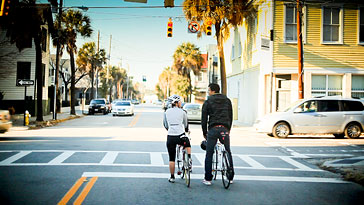