An innocent heart of a child bleeds so much purity. The kind of virtue I wish I could bottle up and save. Mostly so I can diffuse its essence on the days when a perfect heart seems anything but close. I’ve been having a hard time keeping the clouds at bay, lately. A lot of clutter and cobwebs to dispel. And days that call for a compass just to get out of bed. But my spirits are often lifted best by the reliable roots from my oldest.

My son is a chatty one. He and I talk about all sorts of stuff and he loves to learn new things. So it’s pretty routine to get a firing squad of questions on a daily basis about anything and everything. And more often than not my typical response is I don’t know, Google it. I border the thought that either I’m really unintelligent or else he just has an awful lot to say. My ego says we probably fall somewhere in the middle. Upon one of our recent conversations, we talked about my college years. The educational parts, at least. {We’ll save the recreational aspects for another time}. He asked some excellent questions. Ones that I can better answer now than I ever could have when I was eighteen. So mom, you got your bachelorette degree in Missouri…where do you think I’ll get my bachelor degree? And while I didn’t want to correct that kind of cuteness, I figured I better clarify. So much to his disappointment, I advised him that yes, I got my degree in Missouri. But that it was a bachelor’s degree and not a bachelorette degree. 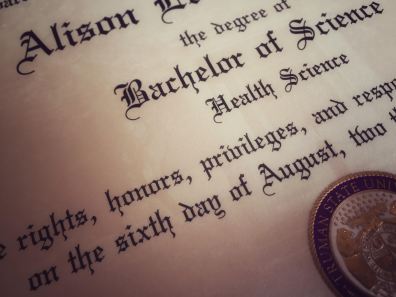 He was confused. I mean, it was logical. I’m female. He’s male. But I guess for one thing on this earth, there is no gender distinction. That tells me there’s a strong societal force in the eyes of our children. One that isn’t necessarily favorable. But the depth of that conversation was a little more than I wanted to pair with our casual outing. So sometimes the almighty parental answer because that’s the way it is has to suffice. I still have a little more time left with that one. Not much…but I’ll take what I can get.

We’ve come a long way. But there’s always room for improvement. Gender disparities are still a thing of the present and discriminatory treatment happens every single day. But someday the current generation will get it. They just have to. Otherwise, why are we building this world together? Perhaps it’ll start if our next President ends up being a female. It’s really not going to matter much if that individual falls in line with your political stance. The changing ways of the world will be upon us. Because a female President of the United States is pretty darn progressive. {By no means am I implying she’s the best candidate. Quite frankly, I don’t think there is one}. This is not a political piece. At all. Because if you’ve been a regular follower then you know that is the last thing I’m going to impose on this blog. {Read Passing a flaming torch} But we’re talking about gender gaps and the representation they have on our society.  And our children. My son is eleven. ELEVEN. And he already sees the characteristic statement it has. He might not understand it (in fact, he doesn’t) but he sees it. And sometimes that’s the only kind of reality we need. So it’s going to be my job to educate him and encourage him to embrace a role in society that not only acknowledges women and their contributions but actually supports and advocates for their equality. I’m not saying he needs to be an outrageous feminist. In fact, I would mightily prefer he not. But change comes from an educated mind. So I’m committed to making sure my son grows up with the opportunity to seize those cultural moments that help prepare him to be an outstanding human being. Because this world has far too many who fall short.

Encourage your children to use their education and make a difference. Let them know you support their ideas, their visions and their dreams. Because those are the individuals who will close our broken gaps. They will be the voice that drives significant change. And they will be the ones who honor a bachelor…and a bachelorette, with finesse.